When teacher and NDCC founder Richard Griffiths first visited Bahir Dar in 2001, it was as part of a voluntary placement fitting IT equipment in local schools. While the work he was doing aimed to improve conditions for Bahir Dar’s students, he realised that it failed to address a deeper problem that existed within the community.

Many of the town’s children had lost their parents and had been fending for themselves for a considerable time. Finding time to earn enough money to live as well as going to school was very difficult for them, and often they reluctantly neglected their education to spend more time with such jobs as shining shoes. Commonly, too, they were living on the streets.

The New Day Children’s Centre was established with the aim of taking away the need for these children to work and allowing them to concentrate on their education, in a safe environment. 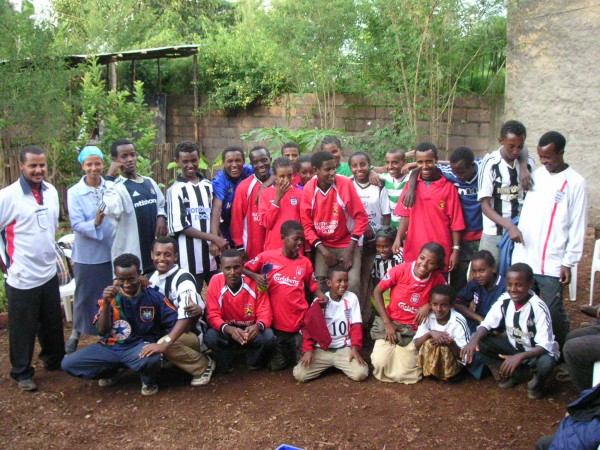 The first New Day Children’s Centre opened its doors in July 2006, supporting just twelve students and employing five local staff. By August 2007, a second centre was up and running, and by July 2008 the two had merged at a larger property. Now, fifty three children are being supported by NDCC.

Students join the Centre through discussion with the Bahir Dar Women’s and Children’s Affairs Bureau and they join us when they are in grade 7 (this is the equivalent to year 8 in the UK). The choice is made on the students’ circumstances and their commitment to education.

In Ethiopia students attend school in half day shifts – one week in the morning, and the following week in the afternoon. While they are not at school the Centre provides them with a safe and pleasant place to spend their time, where they receive three meals a day and additional tuition from the centre teachers, as well as having the opportunity to wash themselves and their clothes and socialise with their friends.

The students follow a programme of study that is primarily aimed at improving their English language skills – lessons from Grade 9 onwards are taught in English, so it is vital that they have a good understanding in order to do well at school. Our aim is for each student to complete their education through to grade 12, when we hope they will do well in their final exams and go on to university.

The Centre is run by Ethiopian staff and as well as providing them with employment we also encourage them to continue with their education. If they wish to continue studying this is funded by the project too.

Our aim is to continue to offer places to a new cohort of grade 7 students each year. It is encouraging to see the impact the Centre has had on the students, who are now happy, confident and healthy young people, but we are also fully aware that there are many more children who would benefit from such support.